Our neighbor Mary Adiego died March 13, 1994. Her death was not tragic, exciting, unexpected or unwanted. Her death completed a solid life, a life that could have been lived in no other city, and maybe, in no other time. It left our Noe Valley neighborhood less interesting, less special.

Mary lived in her house on 23rd Street for 47 years. She reveled in the changes and triumphs brought by each of those years. Her presence was the first thing we told friends about when we described our community.

As our new neighbor, she appeared at our housewarming party five minutes after we opened our doors. She stayed two hours after the official end. She finally left alongside a group of late-departing, longtime friends. That was vintage Mary: come early, mix it up, leave late. 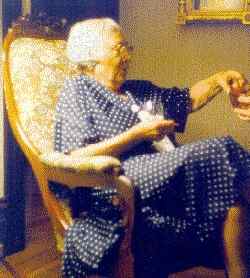 That party was a true introduction to Mary, her San Francisco, and her world. Our home was filled with a few straight colleagues, dozens of gay men and lesbians, and Mary. In that collection of people, Mary held court on the front room sofa for hours.

One moment she was exchanging 20-year-old parish gossip with a group of lesbians. The next minute, Mary was discussing the skills of various doctors at St. Francis Hospital with men she knew from her work as a volunteer.

She outlasted, out-chatted, and out-friendlied us all. The "old lady next door" was the hit of the party.

Mary was born in North Beach 84 years ago. In her neighbor-to-neighbor conversations, she talked about her family: her widowed mother, who struggled to meet the needs of the family; her grandfather, who provided special treats of an occasional egg; and her prettier younger sisters, who married more quickly than she.

At her rosary, the two priests at times seemed confused about which Mary they were talking about at any given moment. Were they invoking the Blessed Virgin or were they describing the virtues of Mary Adiego? One priest settled on "our Mary."

The confusion was understandable. Our Mary lived, believed and witnessed a strong, undiluted and certain Catholicism. A traditional woman. Staunch and determined participant in Masses, church events and Catholic societies. More blunt-spoken than reasonable, Mary did not pull back on her views, her love of experience, or her faith.

Her warmth toward people was unbounded by the prejudice that too frequently passes for religion. She reached out toward her own Italians the same way she gathered goods for a poorer Hispanic family she knew, the same way she worried about the happiness of the Jewish woman whose house we bought, the same way she emotionally nursed the gay men in her wards at St. Francis.

And if we, her next-door neighbors, did not arrange to have enough sociable chats, Mary would appear unannounced at our front door, plate of cookies in hand. It didn’t bother her if we were entertaining other guests when she arrived. She was broad-minded. She cheerfully included in her conversations whomever was visiting.

Mary was a woman who knew five decades of neighborhood lives, loves, and happenings, and she shared the information freely. She was a woman struggling to exist on her Social Security pension, but she scavenged usable clothes to give to the children of the workers at her favorite restaurant. She was an honest woman who told us her only lie was the assurance she gave her son that she would no longer ride the bus after a fall on MUNI a few years ago.

Mary had no desire to live longer than God intended. She loved life, but she was ready when he was. It was only her neighbors who were unwilling for her to leave.

We still listen for her squeaky clothesline to signal a possible conversation. We wonder, now that Mary does not live in the house next door, who will tell us how to make the Little Lord’s Birthday cakes? Who will tell us how it was like to bring up two boys in the parish schools in the ‘50s? Who will threaten us with a mustard plaster if we get a chest cold? Who will bring us a plate of cookies?

We will do our best to pass along what we have learned from Our Mary. Yet, we would have appreciated a few more years in which to receive an education from that traditionally Catholic and quintessential San Franciscan woman.